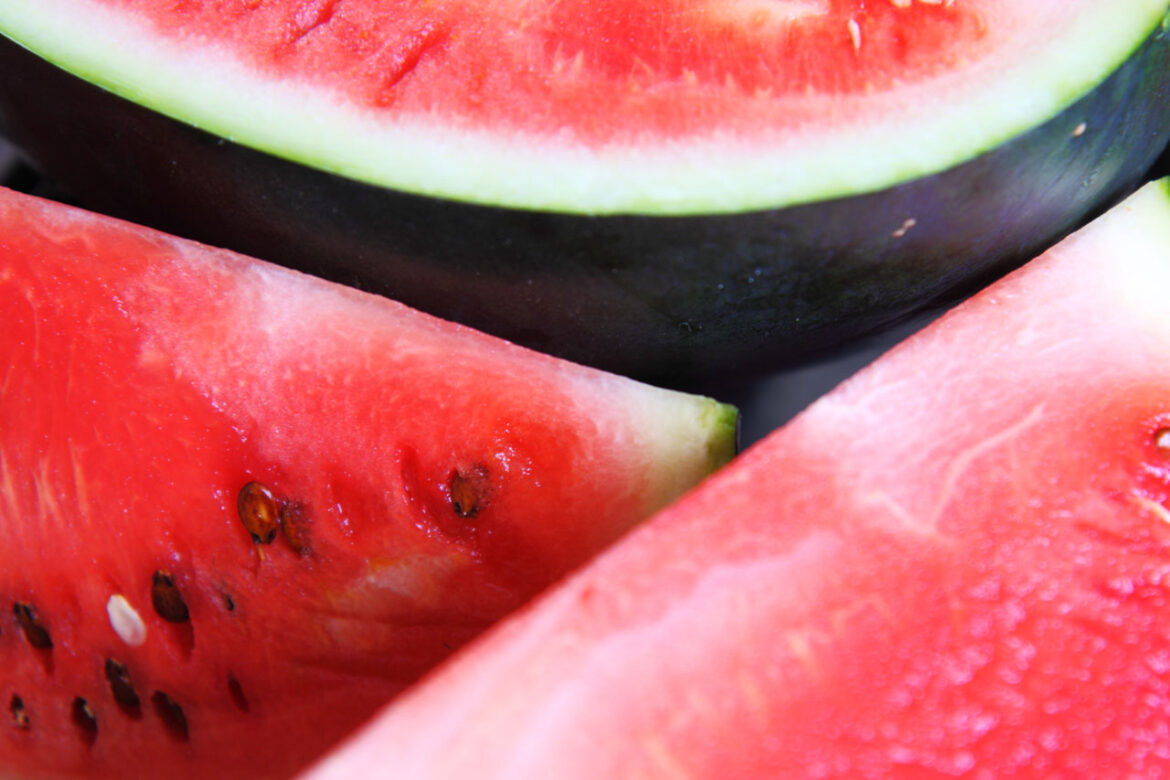 Where to Grow Watermelons

Because watermelons require a long, warm growing season, their best production in the United States occurs in the South and Southwest regions, where there is ample growing time and warm weather. Home gardeners in cooler regions can usually do fairly well with watermelons if they start seed indoors a month or more ahead of planting outdoors, but the vines need consistently warm days and nights to thrive. Watermelons need at least 80-100 consecutive days of very warm summer temperatures, at least 80 degrees Fahrenheit. Watermelons also prefer warm nights, above 70 degrees Fahrenheit is preferred. Watermelons are a warm-season crop, very tender to frost and light freezes. Plan an average of 2-6 plants per person. Watermelons generally take up enormous space, and should not be considered for the small vegetable garden. There are compact varieties that produce tasty and prolific fruits.

The newer refrigerator-size small hybrid watermelons are more satisfactory for the average home garden, especially in the Northeast, where the growing season is shorter. Sugar Baby; New Hampshire Midget; and Lollipop.

A sandy, light loam deeply enriched with manure and compost is ideal. The soil should be slightly acidic, pH 6. Since the vines are generally planted in hills, better yields can be realized by working in a spade full of well-rotted manure and fertilizer such as bone meal into each hill before planting. A well-finished compost would also be a good substitute. In the past, we have layered both green and brown garden wastes into a small mound and covered that with dirt to make a miniature compost mound. After one year, this mound makes an ideal place to plant your watermelons. As a side note: melon rinds are excellent compost material and would make a good base for such a mound.

To get a head start on the long growing season, start plants indoors 4 to 5 weeks before outdoor planting time. The soil must be warm and the weather settled with warm days and nights, as the plants are sensitive to cooler weather. If nights are cool, use hot caps to protect the plants. Melons can be sown directly outside, but some gardeners report better germination with pre-sprouted seeds.

Seedless watermelon seeds are notoriously difficult to germinate, which is the primary reason for their high cost. Direct seeding of seedless watermelon seeds will suffer a very low germination rate, they will almost certainly need to be transplanted. A soil thermometer is critical, and likely a thermostatically controlled heating mat necessary to maintain the soil temperature at the required 85 to 95 degrees F; seeds will germinate quicker at the higher temperature range. The most common reason for failure is too much water in the soil. Water should not be able to be squeezed out of a hand full of soil (too much water), and it should not fall apart in your hands (too little water). Rather, the soil should retain its shape in your hand after squeezing if the proper amount of moisture is present. This is critical for the first 48 hours. Once germinated, temperatures should be returned to temperatures that are representative of their growing environment. Expect seedlings to be less vigorous than standard seeded varieties, and slightly more susceptible to disease. Seedless watermelons will also require cross germination with a seeded watermelon variety in order to produce seedless watermelon fruit. A couple of germination seeds are often included in seedless watermelon packets. Any seeded variety can be used, the ones included are typically just for convenience.

If you start melons indoors, use individual cells or peat pots, not flats, as the roots are too succulent to divide. When you direct sow, plant 2-3 seeds in a hill and then thin the appropriate spacing, depending on whether you train them on a trellis or let them spread on the ground. For direct sowing and transplants, cover seedlings with hot caps to protect from frost, speed growth, and keep out pests. The vines do best if planted in hills. Rows and hills should be set 5 to 6 feet apart each way, with 2 or 3 plants per hill. Thin to the 2 strongest plants in a week.

Watermelons grow extensively broad, ground-hugging vines with soft, attractive foliage. The flowers appear quite suddenly, and it is interesting to watch the tiny melons start to develop after the flower petals drop. Watermelons have separate male and female flowers and are not wind-pollinated. They typically rely on insects for pollination (most likely bees) and will need your help if insect pollinators are insufficient.

To encourage side shoots, when seedlings have 3 leaves, pinch off the growing end. When new side shoots have 3 leaves, pinch off the central growing area again. When fruits begin to form, pinch back the vine to two leaves beyond the fruit. Make sure fruits on a trellis are supported by netting or pantyhose, and fruits on the ground vines are elevated by empty pots to prevent disease and encourage ripening.

The vines are heavy feeders, and also need adequate moisture as they start to develop. Troughs near the plants can be flooded for effective watering. For fertilizer, give each hill about 1/2 cup of 5-10-5 fertilizer, liquid manure, or fish emulsion 3 weeks after planting, and again (if you can find the original hill) after flowers appear. Keep the hills well-watered up to the time fruit starts to fill out. Since weeding and cultivating are such problems with sprawling vine crops, black plastic or thick mulch proves an excellent aid to keeping weeds out, soil moisture in, and melons off the ground as they develop. The plastic mulch should be placed on the ground and anchored before planting, then central holes cut for the hills, with a few extra slits to let rain and hose water filter through.  Plain cardboard and newspaper covered appropriately also work well in a smaller garden setting.

Knowing when to harvest watermelons is the most difficult part of growing them. They should be harvested at the peak of freshness for the best results. Waiting too long gives you nothing but a mealy mess. Not waiting long enough means you may have to throw an inedible treasure out to the chickens.

There are several methods to identify a ripe watermelon, most of which are not entirely accurate at best. Some say you should tap them and listen to the sound they make, some say to look at the small tail to determine its ripeness. The fact is, these are not reliable indicators for all watermelon varieties. The most reliable indicator of ripeness is the color. Ripe watermelons will have darker stripes and the spot the rind rests on will turn from white to golden yellow. Different varieties will darken to different degrees, but this will be your best indicator. If all else fails, plant a variety like Sugar Baby. Its green stripes darken to almost black when it is ripe, which makes the puzzle a little easier.